There is no doubt that the next five years are going to be challenging to say the least!

A government with a pro-privatisation agenda has been preferred to one with a more Public Service ethos. A Party with a death wish against the NHS is trusted more with it, than one with policies for the survival of it as a free public service (on the whole).

An ideology that is instinctively anti-trade union is more desirable than one that is friendlier and collaborative.

The country has chosen Cameron and the Tories. Well, 36.9% of them anyway!

It is easy to use the term ‘Turkeys voting for Christmas’ but I know that people vote for a political Party for a whole range of reasons, as well as not forgetting the majority view that there is no difference between them, and whoever is in power the rich get richer, the poor get poorer and the workers suffer by one way or another.

An election every five years just changes the team and not the rules of the game.

At the same time as our Service needs the help of all staff in getting it back on its feet after a disastrous two years, the government is planning an ideological war against their trade union.

How will this happen? The government will legislate to:

These are just three of the threatened actions against trade unions that may be in the first Queens Speech.

Each of them will pose problems for us.

But let us not forget that these are not only attacks on our trade union per se, but, an attack on us as members of staff for carrying out our legal right to belong to a collective.

It is rare for strike action to happen within the Ambulance Service. Under the current legislation trade unions already have to jump through hoops, climb barriers and almost ask permission from the employer before anything can happen!

Can anybody really say that we were not entitled to go into dispute over fair pay and before that, pensions?

Our industrial action was not against the LAS. In fact UNISON did all we could to protect Londoners while at the same time carrying out our legal right to withdraw labour. It is a fine balancing act.

That balancing act will go if the threatened legislation is passed. UNISON supports the London Ambulance Service. We want to see it succeed. I know the LAS respects the right of trade unions to organise and operate within the Service. It will be a sorry day if we are forced by the Tories to go our different ways.

The withdrawing of DOCAS is nothing short of a disgraceful act of vindictiveness and spite. Stopping the ability of members to have their union subscriptions deducted from their pay by the employer is counter productive.

The London Ambulance Service has never had a problem working with the unions over DOCAS because they have always seen the benefits for both sides.

To force even friendly employers down this road will disrupt local partnership working at best, and, at worst, completely end them.

If union representatives’ facility time is withdrawn or limited within the LAS there is three losers: the patient, the staff and the Service.

Anyway, what will be will be. The union will carry on. We have to carry on. No one else will do it for us.

The union is the only organisation within the workplace to protect and help us, and we will not let anyone, government or management, impede our struggle to build a strong voice for all staff.

Now, more than ever, staff within the London Ambulance Service need UNISON. Our Service will be under pressure like no time before.

But remember: Tough times never last, but tough people do!

To conclude with some good news. The opposition is growing! I saw this stuck on a telephone box in Euston! 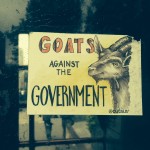 I now expect the cows to milk this for all it’s worth, the chickens to crow about it and the pigs to save their own bacon (and tell porkies)! Unfortunately the sheep are expected to do very baaadly.

Talking about crowing (which I’m not of course) but just to inform members that LAS UNISON were crowned ‘2015 Quiz Champions’ at the recent National Ambulance Seminar in Lincolnshire last weekend!

I mention this in passing as it irritates the life out of other branches!

(*Our team was ‘London Deals’ which included two members from the Isle of Wight).

Information on all issues can be found elsewhere on our website.

If you are reading this, work for the London Ambulance Service or are eligible to join, and are not yet a member of UNISON Join Today!

We are stronger together.